When a nutritious breakfast can also taste like pie. One serving of this chia pudding with our pumpkin spice kefir has over 4 times more protein than one serving of eggs. Now there’s no excuse to not eat pumpkin pie (chia pudding) all day.

Several studies have shown a strong association between the gut-brain-microbiota. Probiotics introduced to the gut have been found to support immunity, improve allergies, and improve digestion. We’ve discussed before how our brain and gut communicate with each other. Scientists previously thought there was a one-way communication between the brain and the gut, but now realize that it’s a two-way line. Basically, your gut, which is comprised of millions of neurons called the enteric nervous system, is also talking back to your brain. On top of alerting your immune system to foreign invaders, digesting and absorbing nutrients, your gut also produces serotonin. In fact, about 90% of the serotonin in your body is produced by the cells in your gut. 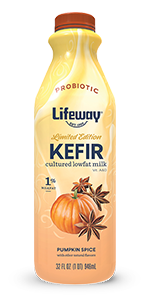